The buzz is definitely back in Baltimore, Ireland. The West Cork coastal community is heavily reliant on tourism and its economy is booming since Covid-19 restrictions were eased, giving it a record July and August.

Bookings for the following weeks suggest the surge is not over for staycationer visits, although catering for them won’t be easy as the hospitality sector there, as in other places, is struggling due to a lack of staff.

On the plaza overlooking the harbour, there’s hardly a seat left unoccupied as soon as the bars and restaurants open in the morning, especially if it’s dry. 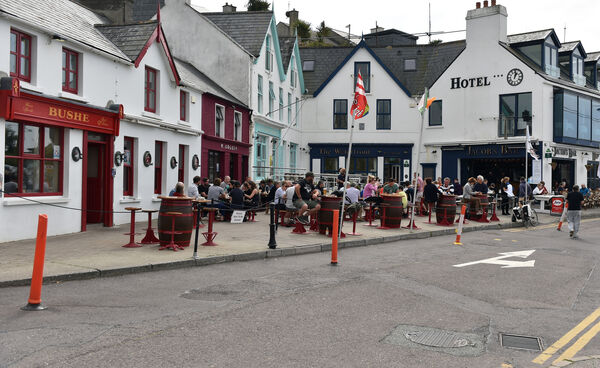 Patrons enjoying the cuisine and sunshine outside Bushe’s and Jacob’s in Baltimore, Ireland. Picture: Eddie O’Hare

Tony Bushe, who runs Bushe’s with his brother, Aidan, and their wives, reopened just for takeaways in June. As they expanded the offering, the punters rolled in.

“It’s been very good considering the year we’ve had. The weather has been pretty good too. Most people are more comfortable sitting outside because of Covid and if the weather’s good it can put takings up by 30%. If it’s bad it’s 30% less than normal,” Tom said.

“We getting staycationers from all over Ireland, even as far away as Donegal. There are less foreigners though than other years. There are some Italians and Germans, but the Americans are noticeably missing,” Tom said.

He has only opened outside for food and drink because he can’t get enough staff to man the inside as well.

Staffing issues are also about to become an issue for Youen Jacob and his wife, Kate, who run the hotel, bar and restaurant next door.

‘Getting staff is a real stressor’ 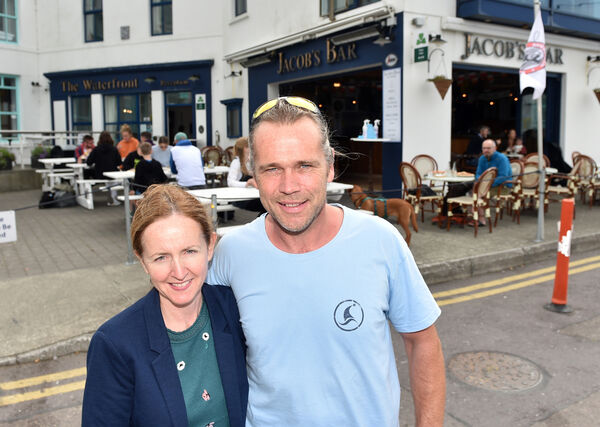 Kate explained that “getting staff is a real stressor.” She employed a lot of young people who had never worked in the hospitality sector before, so it took time to train them. A lot of her staff are students who are on their way back to college, which is going to cause issues in the weeks ahead. As a result of demand on the business since restrictions have eased, she has had one day off since the end of May.

Still, the business makes hay while the sun shines.

“There was a waiting list in July and August to book rooms. We’ve been operating at maximum capacity [across the business]. September and October are looking really good as well. We’re starting to see a few more UK visitors, which is nice because we lost them for a long time,” Kate said.

When the couple started music sessions outside there were constant queues for them. But as the weather turns they’re thinking ahead.

“We’re getting big umbrellas along with Bushe’s so we can cover the square area,” Youen said. “I’m hoping 2022 will be better, especially for everybody’s sanity.” 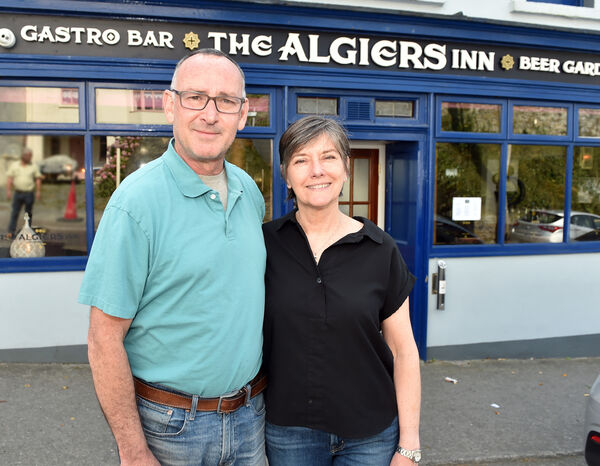 Bill and Ann Hillyard bought The Algiers Inn in February 2020 and traded for just two weeks before Covid locked them down. Picture: Eddie O’Hare

And if sanity was ever tested then it surely was endured by husband and wife Bill and Ann Hillyard. They bought the nearby Algiers Inn in February 2020. They traded for just two weeks before Covid locked them down.

“No, it was not a great time to buy a restaurant,” said Bill, who, with his wife, came over from southern California.

So while in lockdown they remodelled the whole place, “which took longer than we thought”.

Since reopening customers are prepared to wait in the queue for two hours to get in. Darina Allen was among recent diners.

“It’s been really jammers. Our problem is we can’t get food out fast enough. We’re feeding around 160 customers a day. We’re also finding it hard to get staff,” Bill said.

They say the busiest person in Baltimore is Rianne Smith. She was even busy during lockdown, picking up litter as she always does. 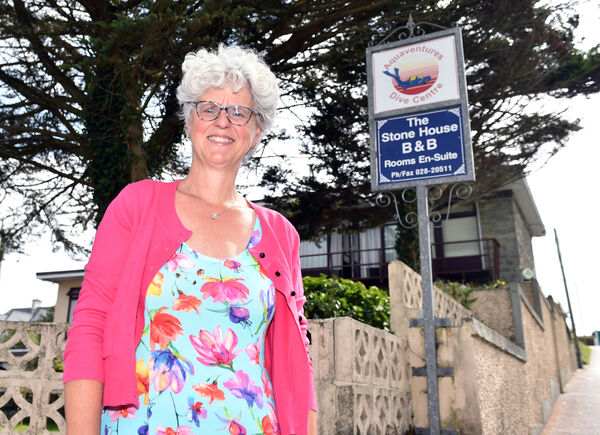 Rianne Smith, owner of Stone House B&B and Aquaventures dive centre has been ‘flat out’ with all the businesses since restrictions started to ease. Picture: Eddie O’Hare

Rianne Smith, who is Dutch-born and a valued translator, studied and lived in London for 14 years, before moving to Baltimore, Ireland 25 years ago.

Along with husband, Jerry, she runs Aquaventures. They organise whale and dolphin tours, eco trips, diving charters and snorkelling.

On top of that they run the very busy Stone House B&B.

She said she was “flat out” with all the businesses since restrictions started to ease, although there is one change to previous years.

“The passing trade for the B&B is gone, it’s all online bookings now,” she said.

Rianne is also involved in the local Explore Baltimore & The Islands Marketing Cooperative, as well as head launcher of the local RNLI. She organised a local walking group, bridge club and swimming group.

“I was previously in the tidy towns but stood down as I was too busy, although I still do litter picking in my spare time,” Rianne said.

There aren’t too many Michelin-starred chefs in Co Cork, but one of them is Ahmet Dede. He now works at The Customs’ House in the village and gets rave reviews.

Shane Menton and Maria Archer bought the building in 2019 and undertook extensive renovations to modernise it, while Ahmet joined the business last year when dede@thecustomshouse was born.

“The pandemic arrived and the opening was delayed until Government restrictions were lifted,” Maria said.

“We started to change our outdoor space into a barbecue and dining experience. This new addition has proven to be a lifesaver for the business, enabling us to open when indoor dining was closed. We decided to create a more relaxed fine dining experience,” she added.